Hell Pizza is one of New Zealand’s most loved brands, synonymous for its innovation in taste and clever marketing behind campaigns such as the rabbit pizza timed to coincide with Easter, and Australasia’s hottest pizza the ‘Flaming Dragon’. For Marty Richards, the philosophy behind the brand was an appeal he could relate to; it was also a case of history repeating.

20 years ago Marty worked as a delivery driver for a Mount Albert pizza company while studying for a business degree. “I actually really enjoyed that job. I particularly liked the interaction with customers.”

This job was just the first of a number of hospitality positions Marty enjoyed while studying and traveling. “I learnt a lot about customer service from working in hotels and restaurants. I found it both challenging and rewarding.”

After completing his studies, Marty worked for an advertising agency for a couple of years. “While I enjoyed the work, I realised quite early that working in an office was not my cup of tea.”

So he took a break for a few months to help a friend build a house and 13 years later he was still building.

Throughout these years Marty always had a strong desire to be self-employed. “Building allowed me to get a taste of this. I was able to contract to companies for regular work but often spent time building houses for myself.”

Eventually the time came to give his body a rest and explore new opportunities. “I had to ask myself what I wanted to be doing for the next 10 years and where I wanted to end up. I had often considered the idea of going out on my own but was also quite interested in buying a franchise. I liked the fact that I would not be completely on my own. I’d have the support of a team behind me.”

A Slice of Hell

It took many years of consideration for Marty to finally take his leap of faith. “I spent years thinking about it. I often read the Franchise NZ Magazine and visited the ABC website to check what businesses were available. I wanted to be confident that I was making the right decision.”

It finally took a call to ABC’s franchise specialist James to get things moving. “It seemed right to talk with a broker who specialised in franchises. My first question to James was - what business would you buy?” This conversation led to Marty and his wife Kim purchasing one of Hell’s top Auckland stores in Grey Lynn. “The interesting thing about this store is that it wasn’t publicly listed. I would never have known about it if I hadn’t spoken with James.”

At first Marty was a bit unsure and actually passed on the opportunity. “I told James to offer it to someone else. He accepted this decision but asked what would I do instead?” “I didn’t know, but it made me realise that if I wanted a change in lifestyle, I would have to take a chance eventually. So after a couple of days of deliberation with my wife, we decided that this type of opportunity may not come up again for years and we had to go for it.” Marty then proceeded to do more research on the brand and also contacted the Hell Head Office and spoke with Ben Cumming, the General Manager. “Ben was really helpful and provided me with lots of information to back up the business. He didn’t try to sell it to me, he just gave me the facts. But these facts combined with my own research helped me realise that the business was sound and there was no other brand for me. I called James and said let’s do this.”

“This started the due diligence and negotiation stages. They were testing times for us but James was great to deal with and worked hard to get the deal across the line. I put a lot of trust in him and I’m happy to say it paid off.”

James was also able to provide Marty with the right banking contacts. “I had initially approached the bank myself but found it difficult. So it was a bit of a relief when I met with a banker who really wanted to help. After that first meeting, I was confident we could make it happen.” 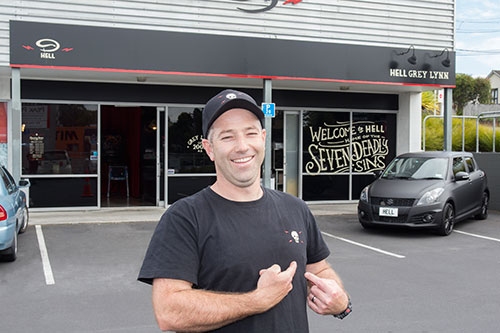 It’s been almost a year now since Marty took the keys to the shop and he has had time to reflect on his decision to take the leap. “It’s been a big challenge but I’m really enjoying it all. I enjoy being able to control my own hours and am able to spend time working both in and on the business.”

“I was quick to realise that staff were my biggest asset. They are amazing and really passionate about the brand and the store. I try to keep them happy as much as possible. A positive work place can only translate to happy customers and this makes for good results in the long run.”

The support from Hell Head Office and the area managers have also made Marty’s first year a positive one. “They have been really helpful and it is thanks to them I am 100% sure I chose the right brand.”

“I’m also still in regular contact with James who has continued his support well after the sale date. I think this shows that it’s not just about the transaction, he is genuinely interested in helping people get results.”

So looking back, would Marty do it all again? “Oh for sure, I only wish I had done it sooner!”

$230,000
Otago
#32954
Do you have a love of sport and would you like to live in Alexandra in the heart of Central Otago? This is a traditional general sports store, well...
Read More

$700,000
Otago
#33014
Do you have a flare for Interior Design and are looking for a great opportunity. Wanaka Interiors is an excellent business generating a very healthy...
Read More

$765,000
Southland
#33000
Located in the beautiful seaside town of Riverton, 30 kms from Invercargill, and on the Southern Scenic Route. The Aparima Restaurant and Bar is a...
Read More

POA
Canterbury
#32996
First time on the market! Les Delices Bakery and Patisserie has been open since January 2017, generating impressive cash-flow with sales of $17,000...
Read More

Flowers After Hours - No Need to be a Florist

$1,350,000
Auckland
#33002
This is one of Auckland's highest profile and most iconic premium flower and gift stores, serving the central suburbs of Auckland. The business has...
Read More

Flowers After Hours - No Need to be a Florist

$595,000
Marlborough
#32913
With its roots firmly set in the Marlborough Sounds and the upper South Island, Foreshore Construction has become the go-to specialist for all...
Read More

Environmental Tourism at its Best!

$675,000
Marlborough
#32934
E-Ko Tours proudly provides an exclusive range of guided and self-guided sea and land-based tours to areas of high wildlife interest within the...
Read More

Environmental Tourism at its Best!

$545,000
Marlborough
#32853
Delivering average annual revenues of $1.4 million and a gross profit of 45%, this is a strongly performing business. With its long-serving and...
Read More

$2,900,000
Bay Of Plenty
#32845
Here is a rare opportunity to purchase a strong performing, premium service station in the heart of the Bay of Plenty - after 20 plus years of...
Read More

$995,000
Auckland
#32829
If you're looking for a solid business opportunity in a proven and growing market, look no further. This well-established design & build swimming pool...
Read More

$625,000
Auckland
#32814
Been wanting to buy into the training sector? This NZA Apprenticeship franchise for the territory north of Auckland is a successful going concern,...
Read More

$795,000
Northland
#32797
Are you looking for a lifestyle change where you can live in the sought after Bay of Islands? Owning a company that is making profits of $325k?...
Read More

$1,500,000
Auckland
#32688
Here is your chance to own a profitable business on beautiful Waiheke Island, just a stone's throw away from Auckland city. Waiheke Living is the...
Read More

$575,000
Auckland
#32671
Are you looking to turn your passion into profit? On offer is a home based technology/sporting business, www.mytime.net.nz, that offers true...
Read More

$429,000
Taranaki
#32720
A significant opportunity presents itself to New Plymouth as The Cheesecake Shop now seeks a new franchisee for their successful, global franchise...
Read More